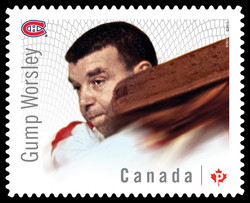 Born May 14, 1929, Montréal, Que. Worsley’s innovative style of lying on his side and making a wall of his pads became known as “Stacking the Gumpers.” The jokester, who once said his face was his mask, won the Calder Memorial Trophy as rookie of the year for the Rangers in 1953. With the Canadiens, he won the Stanley Cup® Championship four times and the Vezina Trophy twice as the NHL’s best goalie between 1965 and 1969. He was inducted into the Hockey Hall of Fame in 1980.

Montréal-born Lorne “Gump” Worsley joined the NHL’s New York Rangers ® in 1952, and spent the next 10 seasons as an outstanding goalie for the struggling team. In 1963, a surprise trade returned him to his hometown to play for the Montreal Canadiens. Worsley backstopped the Habs to four Stanley Cup Championships and picked up two Vezina trophies. He retired in 1969, in part due to the increasing travel demands of a league that had recently doubled in size. But Worsley couldn’t resist the call of professional hockey and was enticed back later that season by the Minnesota North Stars™. He left the ice for good in 1974, respected for his long career, his netminding prowess, and his ability to keep his teammates laughing. Worsley was elected to the Hockey Hall of Fame in 1980 and died in 2007 at the age of 77.