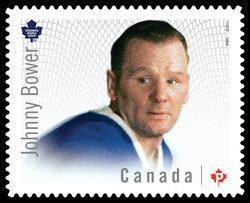 Born November 8, 1924, Bower was a pioneer of the goalie poke check – diving headfirst into an attacking player to dislodge the puck from his stick. This he did without the protection of a mask. A member of Toronto’s last Stanley Cup® championship team, Bower captured four Cup Championships in his career (1962, 1963, 1964 and 1967). He also won the Vezina Trophy twice (1961 and 1965). He retired at age 45 and was inducted into the Hockey Hall of Fame in 1976.

Hailing from rural Prince Albert, Saskatchewan, Johnny Bower found his calling between the posts at an early age, his first skates being hand-me-downs from a friend and his hockey pads fashioned from old mattresses. Bower entered the NHL for one season in 1952, as the goaltender for the New York Rangers ® and made the permanent jump to the League in 1958, with the Toronto Maple Leafs ® . There, he became known for his aggressive poke-check, a move that put his unmasked face at ice level. As the last line in the Leafs’ defence, Bower helped the team secure five Stanley Cup Championships and earned two Vezina trophies. When “The China Wall” retired in 1970, at age 45, he was the second-oldest goalie ever to play in the NHL and had raised the bar for his position through his daring play. Six years later, he was induc ted into the H o ckey Hall of Fame.