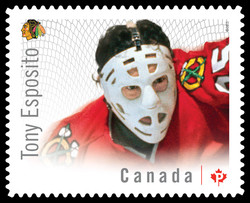 Born April 23, 1943, Sault Ste. Marie, Ont. The man fans called “Tony O” was a pioneer of the now-popular butterfly style. He started his NHL career making 13 regular season appearances for the Montreal Canadiens in 1968-69. A year later, he won the Calder Memorial Trophy as rookie of the year as a member of the Blackhawks. He would win the Vezina Trophy as best goalkeeper in 1970, 1972 and 1974 and play in the 1972 Summit Series against the Soviet Union. He was inducted into the Hockey Hall of Fame in 1988.

He was nicknamed Tony “O” for his remarkable shutout ability. He entered the NHL with a partial but remarkable first season in 1968, winning the Stanley Cup with the Montreal Canadiens. The following season, Esposito moved to the Chicago Blackhawks ® where, in 14 seasons, he never failed to backstop his team to the Playoffs. As the storied goalie for the Blackhawks, he adopted the open-legged butterfly stance and earned a reputation for his lightning- quick glove hand. More than fast, his glove save benefited from another advantage: Esposito was a rare left-handed goalie – and attacking players were accustomed to a glove worn on the opposite hand. All this and more contributed to his three Vezina Trophy wins, 76 incredible regular-season shutouts over the course of his career.