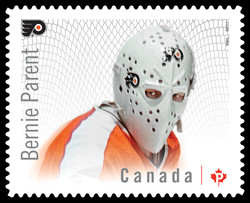 Born April 3, 1945, Montréal, Que. Considered by many as the last great standup goalkeeper, Parent won the Stanley Cup, Vezina Trophy and Conn Smythe Trophy as most valuable player to his team in the playoffs in 1974 and 1975. His white Fiberglass mask with Flyers logos at each temple became iconic, making the cover of Time magazine in 1975. His mask decorations preceded the grandiose works of art that are modern-day masks. He was wearing his mask a night in February 1979 when a stick accidentally poked through its right eye hole, causing permanent damage to Parent’s vision and ending a magnificent career at age 34, while he was still in his athletic prime. Parent was inducted into the Hockey Hall of Fame in 1984.

During games of street hockey in his hometown of Montréal , Bernie Parent fell in love with the challenge of stopping a puck. From that moment, a world-class goalie was born. Parent dreamed of playing in the NHL – a dream that came true when the Boston Bruins ® recruited him to play two partial seasons in 1965-66 and 1966-67. In 1967, Parent joined the newly created Philadelphia Flyers ® and, four years later, was traded to the Toronto Maple Leafs ® . Not long after, he joined the troubled World Hockey Association for the 1972- 73 season before returning to the Flyers and their adoring fans. With Parent between the pipes, the Flyers, then nicknamed the “Broad Street Bullies,” were unstoppable. In 1974, the team notched its first Stanley Cup Championship, a feat it repeated the following year. In both spectacular seasons, Philly’s star goalie claimed the Vezina and Conn Smythe trophies. In 1984, Parent was inducted into the Hockey Hall of Fame.