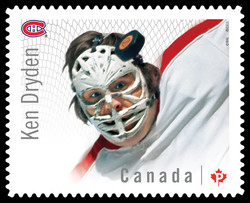 Born August 8, 1947, Hamilton, Ont. Dryden not only shone on the ice, but influenced the way we perceived our national winter sport through his writing and teaching. The Game, one of several books authored by Dryden, was published in 1983 and described by one journalist as an intriguing “meditation on hockey’s special place in Canadian culture.” Dryden won the Stanley Cup® Championship six times, his first before playing a full season in the NHL. He remains the only NHL player to ever win the Conn Smythe Trophy as playoff MVP before winning the Calder Memorial Trophy as rookie of the year. In just more than seven full seasons, Dryden won the Vezina Trophy an amazing five times. He also played for Team Canada in the 1972 Summit Series against the Soviet national team. He was inducted into the Hockey Hall of Fame in 1983, his first year of eligibility.

Ken Dryden burst into the NHL in 1971, when the Montreal Canadiens ® called on him to play six games with the team during the regular season. He not only won them all but also backed the team through the Playoffs to a Stanley Cup Championship. For his contribution, the rookie goalie took home the Conn Smythe Trophy as the most valuable player in the Playoffs. After two more successful seasons and a Vezina Trophy in 1973, Dryden surprised fans by announcing his retirement at age 26 to pursue law studies. After a year away from the NHL, however, the Canadiens enticed him to return. He helped the team to four Stanley Cup Championships in a row, while earning four more Vezina trophies. For winning a stunning six Stanley Cup Championships in just eight seasons.