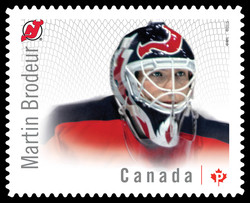 Born May 6, 1972, Brodeur made hockey history with puck-handling prowess so remarkable that lead to “The Brodeur Rule” in 2005-’06, limiting where goalkeepers can handle the puck outside the crease. He won the Calder Memorial Trophy in 1993-94, his first full year as the Devils’ starter, and the Stanley Cup® Championship three times over his career. He is a four-time Vezina Trophy winner, and five-time winner of the William M. Jennings Trophy for the fewest goals against. Brodeur also won two Olympic gold medals with Team Canada in the 2002 and 2010 Winter Olympic Games, and is the only goalie in NHL history with eight 40-win seasons. He is also one of only two goalies to have scored a goal in both the regular season and the Stanley Cup Playoffs.

Hailing from Montréal – a city with a reputation for producing great goaltenders – Martin Brodeur played his first NHL game March 26, 1992, as a member of the New Jersey Devils ® . Just 19 years old at the time, he joined the Devils’ lineup fulltime the following year, launching a career that spanned 22 seasons and earned him countless goaltending records – including the most wins of all time (691) and the most minutes played. Brodeur beat some of the longest standing records in the NHL, claiming one of his most impressive titles in 2009, when he topped 103 shutouts – a bar that had been set by the legendary Terry Sawchuk almost four decades earlier. With four Vezina trophies to his name and many other awards, Brodeur has earned his place as one of Canada’s greatest goaltenders. His father, Denis Brodeur, a former goaltender and successful hockey photographer, snapped the image used to create the stamp.