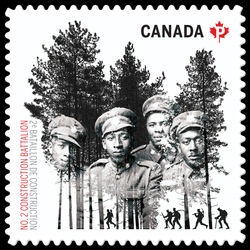 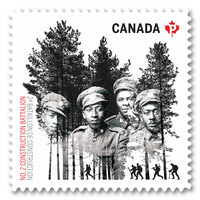 With their country going to war in 1914, Black Canadians stepped forward to join the fight but many were turned away because of racial prejudice. By persevering, they finally won the right to serve overseas, with hundreds of them joining a new, predominantly black unit.

Battalion’s men volunteered and served in face of prejudice

Today, 100 years after the No. 2 Construction Battalion was formed, Canada Post is honouring its determined soldiers on a new stamp that marks Black History Month.

The stamp uses archival photographs in the foreground to depict the faces of some members of the unit, who represent their comrades. Below, against a backdrop of tall conifers, members of a forestry crew move in silhouette, their tools on their shoulders. The men felled trees in a mountainous region of France, then milled the timbers into lumber that supported the walls of trenches, built encampments and repaired the railway lines and roads that supplied the front.

They worked 10 hours a day, six days a week, using hand tools. Living and working conditions were harsh. They endured segregation: their sleeping quarters were separate from those of white soldiers, as was the hospital wing where they received medical treatment, but they ate meals with white comrades. While most never saw combat, some died from pneumonia or other diseases.

"The Battalion's creation is a story of persistence in the face of adversity," says The Honourable Judy Foote, Minister of Public Services and Procurements, responsible for Canada Post Corporation. "They helped to pave the way for later generations of Black men and women and people of all diverse races to serve in Canada’s army, navy and air force."

“Their determination to serve and their contribution to the war effort were an important step on the journey to racial equality in this country,” says Deepak Chopra, President and CEO, Canada Post. “We are proud to highlight this little-known aspect of Canadians’ participation in that epic conflict.”

When the First World War broke out in August 1914, military recruiting offices were flooded with men eager to serve in a war that many thought would be over by Christmas. But Black Canadians who tried to enlist needed permission from the local regiment’s commanding officer. It was rarely granted.

By 1916, Canada had been at war for two years and began to face a growing manpower shortage. Black Canadians had continued to pressure the government to allow them to serve. In response, the No. 2 Construction Battalion was formed to recruit Black Canadians from across the country. Hundreds joined up, primarily from Nova Scotia, but also many others from Ontario, New Brunswick, Western Canada, and Quebec, as well as more than 160 recruits from the United States. They sailed overseas in the spring of 1917.

All of its officers, including the colonel who commanded the unit, were white – except one. The Reverend William White, the son of former slaves from Virginia, was a distinguished graduate of Acadia University and an influential pastor who spoke out against segregation in Nova Scotia. As the unit’s chaplain, he was given the rank of Honorary Captain, becoming one of the Army’s very few Black officers.