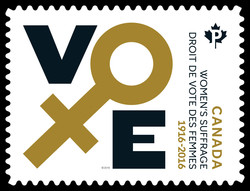 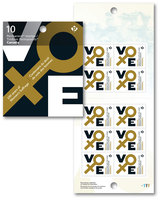 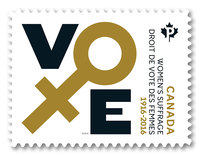 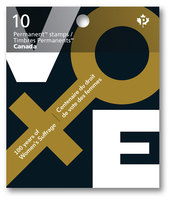 Canada Post today issued a new stamp that pays tribute to the women who fought and won the right to vote 100 years ago in this country. While the suffrage movement began to form nearly four decades earlier, the struggle to secure the vote did not significantly advance until the First World War, when women worked in hospitals, factories and offices, and often raised families alone, spurring demands for equality. In 1916, women in Manitoba, Saskatchewan and Alberta became the first in Canada to win the right to cast provincial ballots.

Designed by Winnipeg-based Tétro, the commemorative stamp is illustrated in the black and gold colours that symbolized the North American movement and incorporates the Venus symbol of femininity as the letters “O” and “T” in the word Vote. Vertical text in English and French at the right highlights the women’s suffrage theme and indicates the dates of its centennial.

The Official First Day Cover features one of the most important figures of the women’s suffrage movement, Nellie McClung. Her portrait is set over an image of the 1915 petition to the Government of Manitoba that helped secure full political rights for women in that province. At the bottom is a black and gold banner reading “Votes for Women,” one of several artifacts currently on display in a women’s suffrage exhibit at Winnipeg’s Manitoba Museum.

After Manitoba, Alberta and Saskatchewan, women gained their voting rights in British Columbia and Ontario in 1917, Nova Scotia in 1918, New Brunswick and Yukon in 1919, Prince Edward Island in 1922, Newfoundland in 1925 (before it became a Canadian province), Quebec in 1940 and the Northwest Territories in 1951. However, it wasn’t until 1960 when all Canadians, including Inuit and First Nations, were eligible to vote regardless of race or ethnicity.