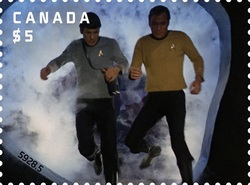 A tribute to the high-tech world of Star Trek, this stamp uses lenticular printing, a method that makes images appear in motion when viewed from different angles. A homage to the show’s most famous technology – the transporter – and one of its most popular episodes, “The City on the Edge of Forever,” they bring the beloved series to the “miniature screen.”

Stamp designer Kosta Tsetsekas, of Vancouver-based Signals Design Group, saw lenticular as an opportunity to recognize the show’s futuristic vision and the special effects that brought it to life.

“I felt that lenticular, developed in the 1940s, had a bit of a low-tech feel that really mirrored the TV special effects used in the original Star Trek series. Thanks to newer technology, it is now possible to show a lot more motion.”

To set these designs in motion, Jonathan Moon and his team at New Zealand’s Outer Aspect approached the project with extra care, not only because millions of fans would be scrutinizing the final product but also because he, too, is a fan.

“I grew up with Star Trek, and I love how science fiction becomes science fact. I can play a snippet of video footage from Star Trek on a stamp, with no electricity required. That’s straight out of science fiction to me.”