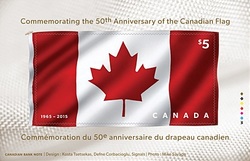 At noon on February 15, 1965, Canada’s new flag was raised on Parliament Hill as a symbol representing all Canadian citizens. These two stamps, issued on the 50th anniversary of that momentous day, celebrate Canada’s most recognizable icon. A domestic-rate stamp proclaims the patriot in all of us as it travels on letters from coast to coast, while a $5 fabric stamp – a first for Canada Post – marks the occasion as the product of a new and ambitious printing process.

Designer Kosta Tsetsekas explains that the biggest challenge in creating the fabric stamp was applying ink to the satin rayon, which is essentially a three-dimensional surface. A battery of tests helped Tsetsekas and the printer, the Canadian Bank Note Company, understand more about the interaction between ink and fabric to achieve consistent results in the production of such an innovative stamp.

“There’s a reason we normally print on smooth paper – it’s because ink behaves much more predictably on that surface,” says Tsetsekas. “It was interesting to see how metallic inks lost much of their lustre, while some non-metallic ones actually began to look metallic on the fabric.”

But with great challenge comes great reward. For Tsetsekas, our flag shares its anniversary with a very special, personal date – 2015 also marks 50 years since his family immigrated to Canada.

“Being part of the team that produced Canada’s first-ever fabric stamp is very special,” says Tsetsekas. “Designing stamps for the 50th anniversary of our flag is as good as it gets for any Canadian.”

One other Canadian shares his proud sentiment. Joan O’Malley played a very special role in the creation of Canada’s flag. Her father, a senior civil servant with a tight deadline from Prime Minister Lester B. Pearson, asked her to sew prototypes during Canada’s great flag debate. Late at night, her whirring sewing machine stitched together prototype flags that helped bring Canada closer to the beloved maple leaf.

“Having my story told along with the 50th commemoration of our flag is very special for me because it is a part of my history that I would like to share with all Canadians," says O’Malley.