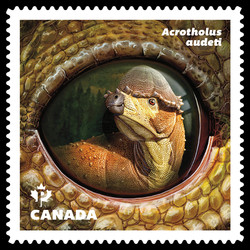 Acrotholus audeti – This small dinosaur possessed a skull bearing a 10-centimeter thick dome of solid bone over the eyes. The bipedal herbivore may have used the dome to butt heads with other members of its species. It inhabited the then coastal lowlands of Alberta about 85 million years ago.