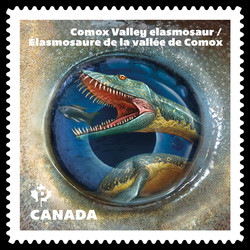 Comox Valley elasmosaur (this fossil has not yet been given a scientific name) – The vicious marine reptile had a neck nearly seven metres long that helped it hunt its prey 83 million years ago. It was discovered in 1988 by a father and his 12-year-old daughter prospecting for fossils in the Comox Valley.