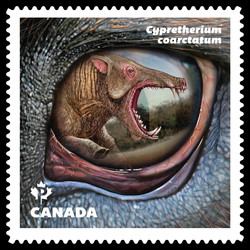 Cypretherium coarctatum – One of a group of mammals commonly known as “terminator pigs,” this fearsome beast had a long, narrow snout with menacing pointed teeth at the front. It lived on the ancient floodplains of Saskatchewan 35 million years ago.