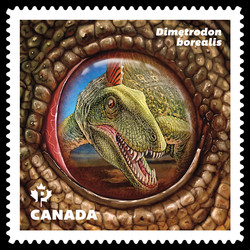 Dimetrodon borealis – Heralded upon its discovery as Canada’s first dinosaur, paleontologists later came to realize it was a mammal-like reptile. Its fearsome jaws were filled with serrated teeth and it likely used a sail on its back for display. It lived in what is now Prince Edward Island about 270 million years ago in, when it was hot and dry and located near the Equator.