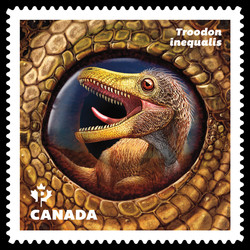 Troodon inequalis – The bird-like dinosaur was similar to the carnivorous Velociraptor of Jurassic Park movie fame. It had the largest brain of any dinosaur in relation to its body size and was a resident of Alberta’s coastal lowlands about 75 million years ago.