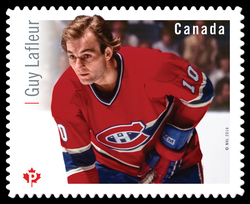 Guy Lafleur
Guy Lafleur became a scoring machine as a member of the Montreal Canadiens®. A native of Thurso, Quebec, he reached a milestone 1,000 points in just 720 games – faster than any other NHL player before him. He also became the first in the League to earn more than 50 goals and 100 points in six consecutive seasons. A record-setting right-winger, he helped the Habs secure five Stanley Cup Championships and took home both the Art Ross Trophy and the Lester B. Pearson Award* three times, the Hart Memorial Trophy twice as well as the Conn Smythe Trophy. Lafleur retired in 1984 at age 33 but returned to play for the New York Rangers® in 1988 – the same year he was inducted into the Hockey Hall of Fame – and the Quebec Nordiques® in 1989. He hung up his skates for good in 1991.

He played for the Montreal Canadiens, New York Rangers and Quebec Nordiques, scoring 560 goals and 793 assists for a total of 1,353 regular-season points over a 17-season NHL career. He reached a milestone 1,000 points in just 720 games, faster than any other NHL player before him. He won five Stanley Cup® Championships as a player with the Canadiens and was inducted into the Hockey Hall of Fame in 1988 and the Canadian Sports Hall of Fame in 1996. The Canadiens retired his No. 10 in 1985.