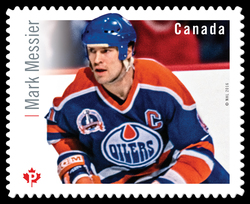 Mark Messier
Introduced to hockey at a young age, Mark Messier’s life was rapidly consumed by the sport. Starting as a stick-boy, he quickly evolved into an NHL prospect and was eventually drafted by the Edmonton Oilers® in 1979. “The Moose,” as he was nicknamed, dominated the League for the duration of his 25-year career. In 1984, he won the Conn Smythe Trophy and his first of five Stanley Cup Championships with the Oilers. In 1991, Messier was traded to the New York Rangers where, after another victorious Stanley Cup Championship in 1994, he became the first player to captain two different teams to the title. When he was inducted into the Hockey Hall of Fame in 2007, he held the record for most number of games played (1,992) and was second on the all-time scoring list. Both records still stand.

He played 25 seasons in the NHL for the Edmonton Oilers, New York Rangers and Vancouver Canucks. He is one of the game’s highest scorers, ranking second among all-time points leaders with 1,887. He scored 694 goals and 1,193 assists in 1,756 regular-season games and holds the record for most NHL games played, including playoffs – 1,992. He won five Stanley Cup® Championships with the Oilers and another with the Rangers. A 15-time All-Star, Messier is the only player to captain two different franchises to Stanley Cup® titles. The Rangers retired his No. 11 in 2006 and the Oilers in 2007. Messier was inducted into the Hockey Hall of Fame in 2007 and Canada’s Sports Hall of Fame in 2009.