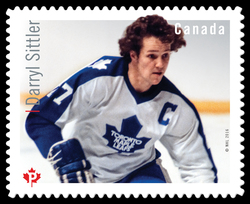 Darryl Sittler
Darryl Sittler’s stellar hockey career began on a frozen pond and was capped with his induction into the Hockey Hall of Fame in 1989. He joined the Toronto Maple Leafs® – donning auspicious number 27 – for the 1970-71 season and achieved early success as the linchpin of the team’s offence. Sittler not only scored 30 or more goals per season over the next decade but also, in 1976, became the first Leaf to record 100 points in a single season. That same year, on February 7, he tallied 10 points in a single game with two hat tricks and four assists – an NHL record that still stands. He became a Canadian hero when he scored the winning goal in the 1976 Canada Cup championship game.

He played for the Toronto Maple Leafs, Philadelphia Flyers and Detroit Red Wings, scoring 484 goals and 637 assists for 1,121 regular season points over his 15-season NHL career. He became the first Leaf to score 100 points in a season and also made history by scoring 10 points in a game against the Bruins on February 7, 1976, an NHL record that still stands. He was inducted into the Hockey Hall of Fame in 1989. The Leafs honoured his No. 27 jersey on February 8, 2003, 27 years plus a day after his historic scoring feat against the Bruins.