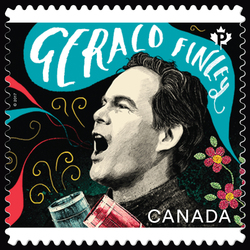 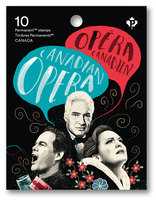 Bold, exuberant and unmistakably creative, the design of this stamp issue on Canadian Opera most assuredly mirrors the art form it reflects.

Canadians have long considered traditional opera as entertainment and a connection to European culture. However, it took until 1967 for Canada to produce an opera it could call its own. Commissioned to celebrate the country’s centennial, Louis Riel – composed by Harry Somers based on a libretto by Mavor Moore with Jacques Languirand – romanticizes the life of the legendary Métis leader. This year, to mark the work’s 50th anniversary, it is being revived by Toronto’s Canadian Opera Company. Filumena – another grand homegrown offering, composed by John Estacio with a libretto by John Murrell – tells the true story of an Italian immigrant who was the only woman to be hanged in Alberta. Calgary Opera is to stage it once again, this time in early 2017.

The creative leaps taken in the style of lettering and colours used in these first-ever stamps by creative director Gary Beelik and designer Kristine Do of Toronto’s Parcel Design and illustrator Peter Strain, reflect the team’s experience in book cover and poster design. According to Beelik, since the dark, dramatic background played such a big part in the overall design of the continuous, five-stamp souvenir sheet, the challenge was to make it also work for the booklet, where the background was not so apparent. “I wanted to utilize all of the real estate, create one flowing element that would connect all the pieces, and depict continuity without sacrificing individuality,” he says. “Against that powerful background, the collage illustrations, speech bubbles and clippings allowed us to do justice to what was a complex subject.”