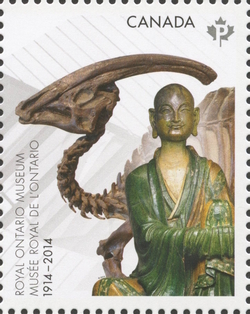 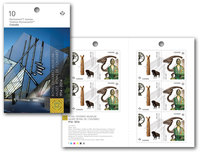 The stamps feature carefully curated photographs of five of the ROM’s most notable objects including Shiva Natajara Sculpture, Mummified Cat, Hadrasaur Skeleton, Luohan Chinese Sculpture and the Bison. The artefacts represent the vastness of the ROM’s encyclopedic collection which includes more than six million objects while the ROM’s Michael Lee-Chin Crystal featured on the stamp booklet cover and the background of the stamp represents the ROM’s continuing research and visionary future.

“For a century, the ROM has inspired learning for audiences around the world,” says the Honourable Lisa Raitt, Minister of Transport and responsible for Canada Post. “This anniversary is the perfect opportunity to proudly pay tribute to these significant artefacts, and the renowned Museum they call home.”

“Over the past 100 years, the ROM has become a globally respected display of world cultures and natural history,” says Deepak Chopra, Canada Post President and CEO. “Canada Post is pleased to join the ROM’s celebrations with this pair of stamps that showcase its vast diversity.”

“The ROM”s year-long festival of Centennial celebrations highlight the many ways that the Museum connects visitors to their world and to each other,” says Janet Carding, Director and CEO, ROM. “The artefacts depicted on the Canada Post stamps and Royal Canadian Mint coin are some of our most iconic, and we’re delighted that they can now be shared and celebrated worldwide with these one-of-a-kind commemorative pieces.”

The Royal Canadian Mint also celebrates with a selectively gold-plated $20 fine silver coin designed by Mint engravers. This coin features a gold-plated image of one of the museum's earliest acquisitions, the statue of Cleopatra VII, set against a rendering of the dramatic Michael Lee-Chin-designed wing of the museum famously known as The Crystal. The ROM stamps and coin are now available at post offices across Canada, on canadapost.ca/shop as well as the ROM Store inside the Museum.

The stamps measure 32 mm x 40 mm and are available in booklets of 10 stamps. They were printed by Lowe-Martin and use lithography in five colours. The souvenir sheet – which features both stamps – measures 122 mm x 70 mm. The Official First Day Cover bears the cancellation site of Toronto, ON. The stamps’ photographs were taken by ROM photographer Brian Boyle and the photo of the Michael Lee-Chin Crystal was taken by Tom Arban Photography Inc. The stamps were designed by Gerald Querubin of Entro Communications/Gottschalk+Ash.

The Royal Ontario Museum is an agency of the Government of Ontario. Opened in 1914, Canada ’s largest museum of natural history and world cultures has six million objects in its collections and galleries showcasing art, archaeology and natural science. The ROM is the largest field research institution in the country, and a world leader in research areas from biodiversity, palaeontology, and earth sciences to archaeology, ethnology and visual culture ‒ originating new information towards a global understanding of historical and modern change in culture and environment. For 24-hour information in English and French, please call 416.586.8000 or visit the ROM’s web site at www.rom.on.ca. Tickets are available online at www.rom.on.ca.