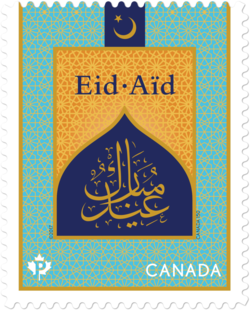 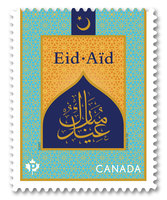 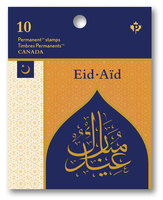 Eid al-Fitr and Eid al-Adha are two of the most important festivals celebrated by Muslims worldwide. Their exact dates can vary from one location to another and from year to year because both begin with the appearance of the new moon.

Eid-al-Fitr – the Festival of Breaking the Fast – marks the end of Ramadan, the month in which Muslims fast from dawn until dusk. In the Islamic calendar, it falls on the first day of Shawwal, the tenth month. In predominantly Muslim countries, celebrations can last up to three days. For the festival, Muslims congregate in mosques or in open spaces and perform a prescribed ritual prayer. Additional celebrations include adorning homes with lights and decorations, providing treats for children, and visiting friends and family. Sweets are particularly popular, and a large and lavish meal is carefully prepared with a variety of special dishes that vary by location and local culture. It is also traditional for Muslims to give charity (zakat al-fitra) to the less fortunate, often in the form of food.

Eid al-Adha – the Festival of Sacrifice – falls on the tenth day of the twelfth and final month of the Islamic calendar, Dhul Hijjah. It commemorates Abraham’s willingness to sacrifice his son Ishmael as an act of obedience to God and marks the end of the annual Hajj pilgrimage, in which millions of Muslims journey to the holiest site in Islam: the Kaaba in Mecca, Saudi Arabia. This celebration is also met with special ritual prayers, feasting, visits with friends and family, gift giving and acts of charity.

The creative approach to the stamp, which was designed by Doreen Colonello and Erin Enns of Entro Communications, reflects traditional elements of Islamic art and symbolism. Central to the design is the Arabic phrase “Eid Mubarak,” which translates into English as “Have a happy Eid,” “Happy Eid” or “Have a blessed Eid.” The pointed arch – a symbol that originated in the Muslim culture – represents the division between sacred and worldly space and the importance of unity, beauty and light in the Islamic faith and its mosques.

Many Muslims wait until the first crescent of the new moon is visible at sunset to begin the festival. The stamp design depicts this moment with the moon and star representing the view of the sky from a window. Its geometric patterns are much like the ones found in Islamic architecture. In the teachings of Islam, abstract patterns such as these encourage thinking about the impermanence of the physical world and the unity and nature of God. Islamic architecture is also the inspiration for the deep blue, warm gold and yellow of the stamp design, while, the turquoise reminds us of the tiles in Turkish and Iranian styles that often cover the walls of mosques.

This stamp is being issued a month ahead of Eid al-Fitr, which takes place around June 26 this year. Eid al-Adha falls near September 2. This is one of three stamps being released in 2017 to honour multicultural celebrations. Still to follow later in the year are two issues, each marking Diwali and Hanukkah.

The stamp for Eid – as well as those for Diwali and Hanukkah – are special commemoratives. While only a limited number of them are to be printed, Canada Post reserves the right to print more. In such a case, collectors will be informed of the change in the press run.