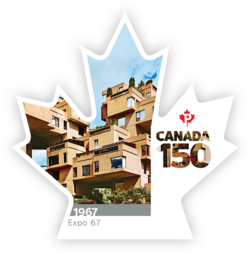 For many Canadians, the highlight of Canada’s centennial was one of the best global gatherings of the 20th century – Expo 67.

The six-month event transformed Montréal and dazzled the world. Canada – then a nation of only 20 million people – attracted more than 50 million people to the city and to spectacular pavilions created by 62 countries. Visitors included some of the most notable figures of the day: Her Majesty Queen Elizabeth II, Princess Grace of Monaco and Bing Crosby among them.

“It was an extraordinary cultural event, an economic success, a technological event in world history and a moment of great optimism in Canada,” Habitat 67 architect Moshe Safdie said at the stamp’s unveiling at Habitat 67 on April 27, 2017 – 50 years to the day after Expo 67 opened. “I would like to convey to you the extent to which people felt there is a better world to come and we can make a difference.”

A photograph of Habitat 67 graces the stamp. The housing complex still reflects the futuristic architecture of Expo 67 and its theme, Man and His World. The modular design was inspired by, as Safdie put it, the principle of “for everyone, a garden.” It conjured up a future with urban housing on a more human scale. Safdie’s creation quickly became the talk of the architectural world and helped launch his renowned global career.

Fifty years later, the legacy of Expo 67 endures in Montréal – and in the personal and collective memories of that moment when Canada hosted and wowed the world.