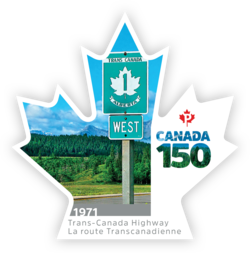 In prosperous postwar Canada, more families owned cars, and road trips for work or pleasure became common – but the country lacked one highway connecting St. John’s, N.L., to Victoria, B.C. The Trans-Canada Highway became the nationbuilding road a growing Canada needed. This highway of adventure, dreams and stories runs through all 10 provinces – and links to roads that reach the Yukon, the Northwest Territories and the United States. The Trans-Canada connects our country physically, culturally, economically and symbolically.

It is also a feat of engineering. Spanning nearly 8,000 kilometres, it is one of the longest national road systems on earth. Construction began in 1950 and while it officially opened in 1962, the TransCanada wasn’t completed until 1971. Countless Canadians have travelled the highway looking to fulfil their dreams, including up-andcoming young artists, entrepreneurs and athletes. For years, country music star Dean Brody travelled thousands of kilometres on the Trans-Canada chasing his dream. Brody headlined a stamp unveiling May 16 in Regina, while on tour. The event was held alongside the highway at the home of Brandt Group of Companies, which relies heavily on the Trans-Canada for its business.

Today, the Trans-Canada, distinguished by its white-on-green maple-leaf markers, still makes it easier for Canadians to explore their vast country and better understand each other