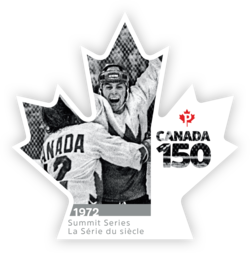 It was a Cold War battle on ice, an emotional rollercoaster ride for the country – and like no other hockey series before or since. The 1972 Canada-USSR Summit Series captivated Canadians. For years, Canada’s best players, being professionals, had been barred from competing against the world’s best amateurs, the Soviets, who were Olympic and world champions. Canadian fans were convinced such a contest would easily establish Canada’s supremacy in the sport. The eight-game Summit Series shattered that assumption. Canada’s best pros, wearing one jersey and called Team Canada for the first time, were expected to handily win every game – but the supposed cakewalk became a clash of titans.

On September 2, 1972, the puck dropped on Game 1 at the Montreal Forum. Team Canada scored two early goals, but the Soviets kept coming at them in brilliantly executed attacks. The Canadians were in trouble by the second period, and lost 7-3. Canadians were stunned. In Game 2 in Toronto, Team Canada fought to a 4-1 victory. Game 3 in Winnipeg was a 4-4 tie. With a chippy, undisciplined effort in Game 4 in Vancouver, Team Canada lost 5-3. The booing from the home-rink crowd triggered a televised post-game rebuke from exasperated and exhausted centre Phil Esposito. His inspirational speech became a turning point in the country’s support and in the series.

The tournament moved to Moscow for the final four games. Boosted by some 3,000 Canadian fans who made the trek to Moscow, Team Canada rallied to win the last three games of the series. Each of those victories was capped by a game-winning goal from winger Paul Henderson, including the series winner in Game 8, depicted on the stamp.