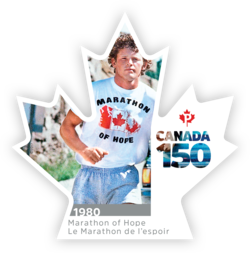 The Marathon of Hope Stamp

"Terry Fox’s 1980 quest to run across the country on an artificial leg remains an enduring symbol of courage and hope."

There are Canadians – like Terry Fox – whose courage and determination allow their stories to live on in others. In 1980, his Marathon of Hope inspired a nation and captivated a country. His remarkable achievement changed public perceptions of people with physical disabilities and helped to reduce barriers for the disabled.

Since his death in 1981, The Terry Fox Foundation and annual Terry Fox Run have raised more than $700 million worldwide for cancer research. In 2007, The Terry Fox Research Institute was established in Vancouver to focus on improving outcomes for cancer patients. Terry Fox was diagnosed with bone cancer and lost his right leg when he was just 18. Three years later, he began his Marathon of Hope and ran – on an artificial right leg – a full marathon (over 40 kilometres) nearly every day for 143 days, which took him more than halfway across Canada.

He had covered 5,373 kilometres when he was forced to end his trek near Thunder Bay, Ontario, because the cancer reached his lungs. Terry Fox died June 28, 1981, less than 10 months after he stopped running and a month shy of his 23rd birthday. On May 25 of this year, Canada Post, joined by Judith Fox – Terry’s sister – and Mayor Dennis O’Keefe of St. John’s, Newfoundland and Labrador, unveiled the Marathon of Hope stamp. Terry Fox’s story teaches us how to hope, how to believe in miracles – and that one person can make a world of difference. It’s a story we’re honoured to tell.