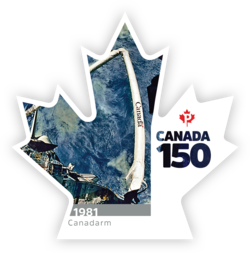 "Canada’s most famous robotics accomplishment – the Canadarm – took flight into space in 1981."

Just two years after Canada’s centennial in 1967, the world watched as two astronauts walked on the moon for the first time. Already a nation of innovators, Canadians were captivated by space and soon became instrumental in developing technologies destined for the stars.

On November 13, 1981, the Canadarm made its space debut on the space shuttle Columbia. The nowfamous robotic arm cemented Canadian expertise in robotics and launched Canada’s close partnership with NASA on human space flight. For 30 years, the Canadarm manoeuvred astronauts, satellites and cargo in space until it was retired along with the space shuttle program in 2011. Today, its legacy continues through Canadarm2 and Dextre, Canada’s advanced robots on the International Space Station, and has inspired technological development in industry, medicine and beyond.

Canadians have earned a reputation for transformative innovations in health care, communications and transportation. Alexander Graham Bell made his first phone call in 1876 in rural Ontario. Dr. John Hopps developed the external electronic pacemaker in the early 1950s, which led to the use of cardiac pacemakers. The first BlackBerry device, released in 1999, quickly revolutionized the smartphone business.