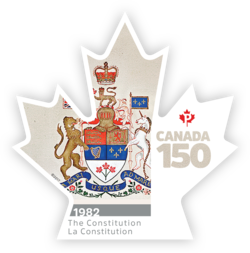 The Constitution and the Canadian Charter of Rights and Freedoms Stamp

On a rainy April 17, 1982, in front of the Peace Tower on Parliament Hill, more than 30,000 people watched Her Majesty Queen Elizabeth II and Prime Minister Pierre Trudeau sign the Proclamation of the Constitution Act, 1982. With that, Canada formally assumed authority over its Constitution – a critical step to full sovereignty. Until that day, only the British Parliament could amend our Constitution.

The Constitution Act, 1982, patriated or brought home the British North America Act of 1867 by changing its name and turning it into a wholly Canadian law that only the Government of Canada could amend. It also enacted the Canadian Charter of Rights and Freedoms, guaranteeing fundamental rights and freedoms for Canadians. The Charter has irrevocably changed Canada and how we live. It strengthens civil liberties and places more limits on police powers. The Charter affirms that every individual is equal under the law and has equal protection and benefit of the law – which has been a crucial guarantee for minority groups.

Canadians fully embrace the Charter as an important national symbol, and it has been a model for other countries’ legislation on human rights. It has earned Canada accolades as a fair and just society.

The unveiling occurred on the very spot where Queen Elizabeth II, Prime Minister Pierre Trudeau and the architects of the Constitution and Charter negotiations made history in 1982. Canada Post unveiled the Canada 150 Constitution stamp May 3 on Parliament Hill.