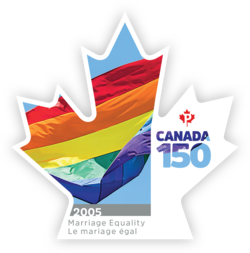 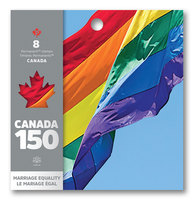 "The long road to marriage equality culminated in the 2005 passage of the Civil Marriage Act, which made Canada the fourth country to grant same-sex couples the right to marry the one they love."

For years, LGBTQ Canadians across the country had fought for full legal equality, with each victory a stepping stone to the next. But until roughly a decade ago, a Canadian still could not legally marry someone of the same gender. This stamp recognizes the achievement of marriage equality in Canada – and highlights the struggle that led to it.

In January 2001, Rev. Brent Hawkes, community activist and minister at Metropolitan Community Church in Toronto, published banns, alternative marriage licences under Ontario law for church ceremonies. He then performed a legal marriage for two couples, one gay, the other lesbian. When a city official refused to register the marriage record of both, the church sued the City of Toronto, the province and the federal government. On July 12, 2002, the Ontario Superior Court ruled that prohibiting gay couples from marrying violated the Canadian Charter of Rights and Freedoms. The following year, Ontario became the third jurisdiction in the world to legally recognize same-sex marriage, followed by eight provinces and territories – all thanks to dedicated activism throughout the country. On July 20, 2005, when the federal Civil Marriage Act became law, Canada became the fourth country to achieve marriage equality.

On May 9, Canada Post joined members of the LGBTQ community at The 519 in Toronto, a city organization dedicated to advocacy for the inclusion of LGBTQ communities, to unveil the stamp