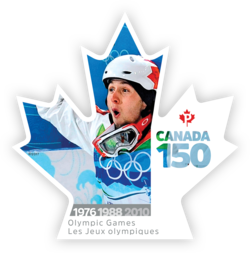 "Our stamps and stories explore the impact of those Olympiads and celebrate athletic ability and the human spirit."

Canada’s Olympic history is full of stories. There are those of Greg Joy winning silver in high jumping in Montréal and Elizabeth Manley capturing silver in figure skating in Calgary. And then there’s Alexandre Bilodeau’s gold medal performance in men’s moguls freestyle skiing in Vancouver – the first Olympic gold for Canada on home soil. Our athletes went on to win 14 gold medals in Vancouver – the most gold medals ever won by any country at a single Olympic Winter Games.

Canadians have always celebrated the achievements of their Olympic athletes, but it means so much more when Canada gets to play host to the world. There have been three Olympic Games in Canada – the Montréal 1976 Summer Olympics, the Calgary 1988 Winter Olympics and the Vancouver 2010 Winter Olympics. Thousands of ordinary Canadians carried the Olympic torch during the relays. The Olympic Games have boosted our sense of national pride; they have inspired our nation, left an indelible mark on our country and showcased Canada to the world. They have produced iconic Canadian moments and inspired generations of Olympians. To this day, one can see the lasting legacy of facilities that have benefited the host cities of Montréal, Calgary and Vancouver – as well as the athletes who continue to use them for training. Canada and the Olympics – it has been an amazing story.