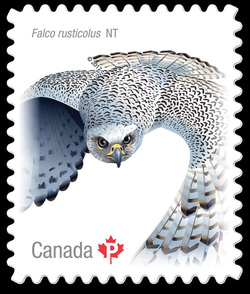 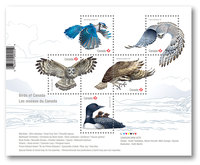 This stamp belongs to Canada Post's three-year Birds of Canada stamp series. Celebrating the diversity of the country's avian life, the series features provincial and territorial birds from across the country. This year is the second year of this three-year series.

Designer Mike Savage, of Signals Design in Vancouver, struck a balance between new and old elements for this soaring sequel. Variations in colour and background freshen the look, while many design aspects echo those of last year’s stamps. Illustrator Keith Martin returned with a similar style. To portray the unique forms of his feathered subjects, he took a deep dive into their lives – immersing himself in photos and videos to understand the mechanics of each in flight. With support from avian expert David Gray, he incorporated the complexities of each bird’s markings, through a number of iterations.

The gyrfalcon is Northwest Territories' territorial bird. The largest falcons in the world, gyrfalcons are fierce predators who typically breed in the Arctic. When hunting, the gyrfalcon approaches its prey at breathtaking speeds, hugging ground contours until it strikes. The gyrfalcon varies in plumage colouring, from pure white, common to those in the high Artic, to dark grey-brown with white streaks.