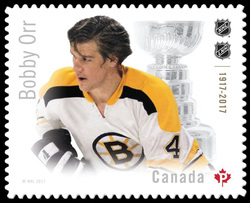 Bobby Orr played 657 regular-season games with the Boston Bruins and Chicago Blackhawks across 12 NHL seasons from 1966 to 1978. He scored 270 goals, 645 assists and 915 points. In 10 seasons with the Bruins, he had six consecutive 100-point seasons. In 1969-70, he was the first player to win four individual awards in one season: Conn Smythe, Norris, Art Ross, and Hart. He’s the only NHL defenceman to have nine hat tricks in his career and, in 1970-71, he set the single-season record for assists (102) and points (139) by a defenceman while recording an NHL-record plus-124 rating. He won two Stanley Cup Championships and was awarded the Conn Smythe Trophy on both occasions. His eight Norris Trophy wins as the League’s top defenceman remains a record. Orr was also awarded the Hart Trophy three times, and the Art Ross Trophy twice. He was inducted into Hockey Hall of Fame in 1979. The Bruins retired his No. 4 in 1979.