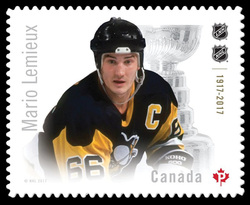 Mario Lemieux played 17 NHL seasons with the Pittsburgh Penguins from 1984 to 2005. In 915 regular-season games, he scored 690 goals, 1,033 assists and 1,723 points. He won the Calder Trophy as rookie of the year in 1984-85 and had 10 NHL seasons of 100 points or more. He has his name engraved on the Stanley Cup five times – two as a player and three as an owner – was awarded the Conn Smythe Trophy twice, the Art Ross Trophy six times and is a three-time recipient of the Hart Trophy. The Pittsburgh Penguins retired his No. 66 in 1997. He was inducted into the Hockey Hall of Fame in 1997.