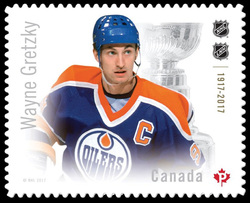 Wayne Gretzky played 20 NHL seasons with the Edmonton Oilers, Los Angeles Kings, St. Louis Blues and New York Rangers from 1979 to 1999. In 1,487 regular-season games, he scored 894 goals, 1,963 assists and 2,857 points – all NHL records. Even if he had never scored a goal, his career assists total would rank him above all other players in points. He retired holding more than 60 NHL records, including the fastest player to score 50 goals in a season, accomplished in a remarkable 39 games during the 1981-82 campaign. Gretzky is a four-time Stanley Cup champion, two-time Conn Smythe Trophy winner, captured the Art Ross Trophy 10 times and the Hart Trophy nine times. Gretzky was also recognized on five occasions with the Lady Byng Memorial Trophy for sportsmanship and gentlemanly conduct, and honoured with the Lester Patrick Trophy for his contribution to hockey in the United States. Gretzky’s No. 99 was retired League-wide upon retirement and he was inducted into the Hockey Hall of Fame in 1999.