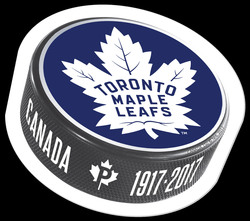 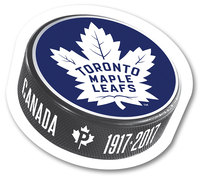 This puck shaped stamp was designed by Lionel Gadoury and Dave Hurds of Toronto-based Context Creative. It comes in a coil of 50 stamps bearing the 100th anniversary Toronto Maple Leafs logo that is paired with a free commemorative stamp dispenser in the shape of a puck.