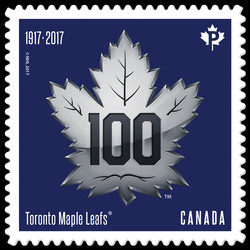 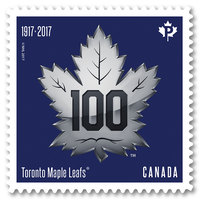 This stamp belongs in a book of 10 domestic-rate stamps that features the team’s new centennial anniversary logo, a redesigned maple leaf with 17 veins for the franchise’s founding year and 31 points in a nod to the opening of Maple Leaf Gardens in 1931. The 13 veins in the top part of the new logo mark the club’s Stanley Cup Championship victories to date.