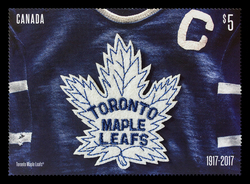 This innovative stamp is a philatelic first. Canada Post has adhered a miniature fabric crest to this $5 stamp, which is available only in a souvenir sheet, complete with commemorative packaging. The result is a unique and tactile stamp that simulates the texture and stitching of the crest sported by the Leafs during their first dynasty era. The issue also displays a vintage sweater belonging to Ted “Teeder” Kennedy, who played centre for the Toronto Maple Leafs during his entire career – 1942-43 to 1956-57. Kennedy also captained the team for eight seasons and, along with teammate Turk Broda, was the first Leafs member in NHL history to win five Stanley Cup Championships. Angled Photo of the Fabric Crest