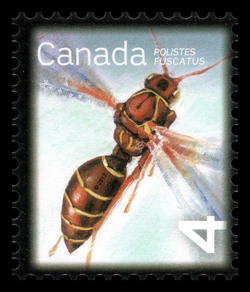 The hidden date for this stamp can be found on the wasp's abdomen. This stamp has the French and English name of the wasp micro-printed on the wasp's wings. Hidden within the stamp design are two icons that identify some of the benefits that this insect provides. First, the icon on the wasp's wing indicates that it is a predator of nuisance flies and plant eating insects.

Second, the icon on the wasp's thorax reveals that adults are effective pollinators.

The bugs are back—it’s a philatelic infestation! This fall, Canada Post will issue a special souvenir sheet with selected Beneficial Insects low value definitives. The 6-legged creatures chosen to take an encore in this new souvenir sheet are the golden-eyed lacewing (Chrysopa oculata), the paper wasp (Polistes fuscatus) and margined leatherwing (Chauliognathus marginatus) on 3-cent, 4-cent and 8-cent stamps, respectively.

Issued in honour of the 125th anniversary of the Royal Philatelic Society of Canada, the souvenir sheet is aimed at young, beginning collectors. “The Society has always been committed to passing on knowledge about stamp collecting to subsequent generations, which is no doubt a factor in its longevity,” says Canada Post’s Director of Stamp Services Jim Phillips. “You could say we’re helping the Society pass on the collecting bug.”

Special additional features have been added to the souvenir sheet to make it even more interesting to a younger audience. Microtype-sized fun icons, each one depicting a benefit performed by the insects, can be found on each stamp, along with the insect’s common name in English and French.

To encourage budding collectors to take a closer look and find the icons, the low value definitive souvenir sheet is also part of the Children’s Collecting Kit that comes with a 6x magnifying glass. The Children’s Collecting Kit (pictured on page 21) also includes a stock book, a pair of tweezers, a selection of used stamps and the revised 2012 edition of Get Started – Stamp Collecting for Canadian Kids. An Official First Day Cover is also available, with text written in a spirited “creepy crawly” style that should appeal to young collectors, depicting how insects can help farmers grow food.