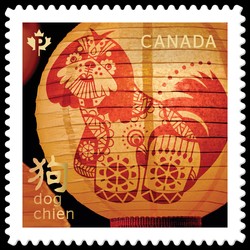 The hidden date for this stamp can be found on the base of the lantern. The stamps in the pane are embossed while the booklet stamps are not. 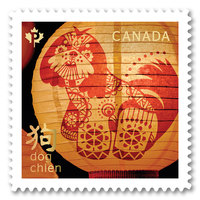 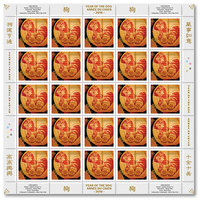 The stamps feature an illustration of a red dog on a glowing lantern. In the lower left is the Chinese character for dog, gǒu, in calligraphy by Order of Ontario recipient Albert Ng.

The Year of the Dog begins on February 16, 2018, and lasts until February 4, 2019. Those born under this sign are said to be loyal, happy, and playful but sometimes stubborn. Driven by a sense of duty and justice, and disinterested in wealth or power, these sympathetic people put the well-being of others above all else.

Red, green, and purple are the lucky colours for those born in the Year of the Dog. Their lucky numbers are 3, 4, and 9.

This stamp is part of the tenth issue in Canada Post’s Lunar New Year series, which began with the Year of the Ox in 2009.

They say “every dog has its day,” but from February 16, 2018, to February 4, 2019, those born in the Year of the Dog will have plenty of days to call their own. They certainly deserve it.

Those lucky enough to be born in the Year of the Dog are some of the most loyal and likeable people around. Possessing many of the same positive attributes as our favourite canines, they are known to be trustworthy, protective, courageous and driven by a sense of duty and justice. If you’re lucky enough to befriend a Dog, your happiness means the world to him or her. And while they can be stubborn and snappy at times, Dogs get along with just about everyone – and are particularly compatible with Rabbits, Tigers and Horses. Famous Canadians born in the Year of the Dog include Justin Bieber, Leonard Cohen and Lucy Maud Montgomery.

This year’s lunar New Year stamp issue was designed by Roy White and Liz Wurzinger at Subplot Design Inc. in Vancouver. When asked about their influences and inspiration, the two highlight the importance of the lantern as a quintessential symbol of the lunar New Year celebrations: “We wanted it to play a pivotal role in the design of these stamps, so we came up with the idea of translating Meimei Mao’s intricate dog illustrations onto these beautiful, illuminated lanterns. Raeff Mile’s photographs of them capture the warmth, richness and depth we were striving for.”