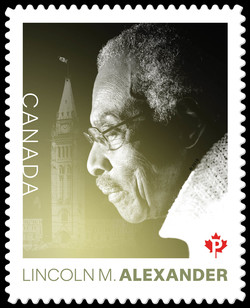 Toronto-born Lincoln MacCauley Alexander (1922-2012) had a distinguished career as a public servant and became a leader in the fight for racial equality. He was the first Black Canadian to be elected to the House of Commons (1968), appointed to the federal Cabinet (1979) and named to a viceregal position in Canada, as Lieutenant Governor of Ontario (1985). He encouraged countless young people to pursue their dreams – often telling them, "I did it. You can. You will."

This stamp, designed by Winnipeg-based Tétro, evokes the personal strength of Lincoln MacCauley Alexander through a historic photograph. "The image selected captures a moment that is both internally reflective and formidable," says designer Paul Tétrault. "The gold metallic glow pays tribute to his visionary influence and trailblazing achievements."