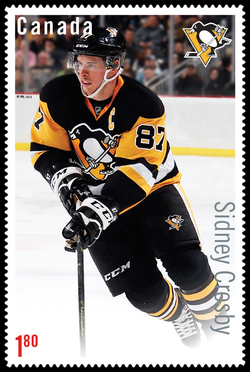 Sidney Crosby
During his debut season, Sidney Crosby – born in Cole Harbour, Nova Scotia – launched his high-scoring and record-setting career in the NHL by becoming the youngest player ever to notch over 100 points in a season. Crosby’s second season netted him an incredible collection of awards and honours, including the Art Ross Trophy, the Hart Memorial Trophy and the Lester B. Pearson Award.* Named captain of the Pittsburgh Penguins® before the 2007-08 season, Crosby led his team to the Stanley Cup Final and narrowly missed winning the championship. The next season, he took the Penguins all the way to win hockey’s ultimate prize. Crosby capped off yet another spectacular season in 2015-16 with a Stanley Cup Championship and the Conn Smythe Trophy.

He has played his entire NHL career to date with the reigning Stanley Cup® Champion Pittsburgh Penguins. Drafted first overall in 2005, at age 18 he became the youngest NHL player to notch more than 100 points. Named captain two years after entering the NHL, he was the youngest captain ever to win the Stanley Cup® championship in 2009 at age 21. He won the Stanley Cup® Championship a second time last spring. He has played 707 regular-season games to date, scoring 338 goals and 600 assists for 938 points. He is also a two-time Olympic gold medal winner (2010 and 2014) and captured gold with Team Canada at the 2015 International Ice Hockey Federation (IIHF) World Championship.