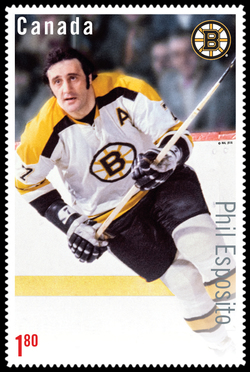 Phil Esposito
Hailing from Sault Ste. Marie, Ontario, Phil Esposito became one of the greatest scorers in the NHL. As a centre for the Boston Bruins®, he used his powerful shot to notch 76 goals in a single season, a record that stood for more than a decade. Esposito impressively racked up more than 50 goals in five straight seasons and was awarded the Art Ross Trophy five times for most regular-season points. In 1970, he helped his team win a Stanley Cup Championship, Boston’s first in 29 years – a feat he repeated again in 1972. Esposito also co-captained Team Canada during the famous 1972 Canada-USSR Summit Series. A superstar until his retirement in 1981, Esposito was inducted into the Hockey Hall of Fame in 1984.

He played for the Chicago Blackhawks, Boston Bruins and New York Rangers, scoring 1,590 points in 1,282 regular-season games over an 18-season NHL career. Esposito helped lead the Bruins to two Stanley Cup® Championships (1970 and 1972) and Team Canada to victory in the 1972 Summit Series. A 10-time All-Star, Esposito was inducted into the Hockey Hall of Fame in 1984 and Canada’s Sports Hall of Fame in 1989. The Bruins retired his No. 7 jersey in 1987.