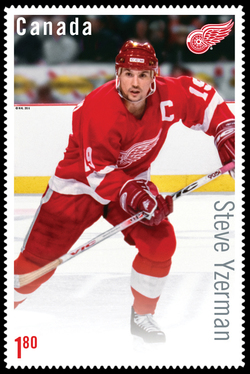 Steve Yzerman
Drafted fourth overall by the Detroit Red Wings® in 1983, Steve Yzerman confirmed his status as a hockey superstar early in his career. At the tender age of 21, he became the team’s captain – a position he held until his retirement in 2006. In 1997, Yzerman led the Red Wings to a Stanley Cup Championship after allowing just four playoff losses – a prize they claimed again in 1998 and 2002. He also laced up his skates to help Canada take home gold at the 2002 Olympics. After he left the ice, Yzerman remained with the NHL to join Detroit’s front office, where he helped the team win another championship in 2008. After a storied NHL career on and off the ice, Yzerman was inducted into the Hockey Hall of Fame in 2009. The following year, he became general manager of the Tampa Bay Lightning®.