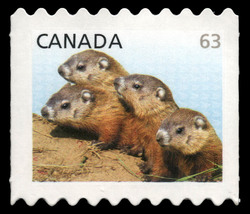 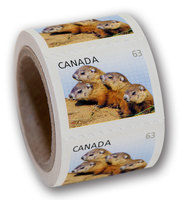 Once again this year, Canada Post will take a peek inside nature’s nursery with four definitives depicting young animals indigenous to Canada. Created by designers Monique Dufour and Sophie Lafortune, these stamps are in the same visual style as the past two editions of this series, with the image of the animal in question set against a mainly white background, with a hint of their natural habitat revealed.

All four animals are native to Canada’s forests and fields.

Baby woodchucks
Baby woodchucks – also known as groundhogs or whistle-pigs – are born hairless, blind and totally helpless. Prey to foxes, hawks, coyotes, and dogs, they begin life outside the burrow with short trips to eat grass and clover. Generally an annual litter of two to nine pups is born toward the end of March or early April. By midsummer, these “teenage” groundhogs will leave their natal den, and move into their own starter burrows, which are usually no more than a few yards away.

Porcupines
Porcupines are also called hedgehogs, quill pigs or quillers – and as babies, they are known as porcupettes. A newborn can weigh more than a baby grizzly bear at birth. Their soft quills harden soon after birth. As short-sighted rodents, they rely almost totally on their sense of smell. When frightened or in peril, their muscles tighten forcing their quills to come out. Aboriginals have used the quills of the porcupines for hair brushes and decorations. Unfortunately one of the greatest dangers faced by this creature is its own lack of balance; porcupines often fall out of trees and can be impaled on their own quills.

Deer fawns
Deer fawns are born with an average of 300 white spots on their fur, which usually disappear in time. Immediately after birth, its mother licks the fawn free of scent to hide it from predators. Except for the time spent nursing, baby fawns stay hidden in the grass until they can walk with their mother. A healthy fawn can outrun a human at a few days old but it takes three to six weeks before they can elude most predators. And it’s a little known fact that roughly 25 per cent of twin fawns have different fathers.

Black bear
Born in late January or early February while momma bear is still in her den, the tiny baby black bear is on average 15-20 cm long, slightly more than 225 g, blind and hairless. When frightened or in trouble, the cry of a young cub is similar to that of a human baby. Mother bear spends the following year and a half weaning, feeding, and teaching her cubs what to eat and how to survive so they can go out and live on their own.

Stamp Design Manager Danielle Trottier says of the series, “Animals stamps are always popular – and focusing on young animal brings in the cuteness factor that we hope gives both collectors and mailers a smile when they see these stamps.”

As in previous years, these four definitives (63¢ domestic, U.S., International and Oversized Mail rates) are available in both booklets and coils. Coil strips of four and ten stamps are available for collectors. The first day cancellation is “Ancaster ON,” the location where the woodchucks on the domestic stamp were photographed.