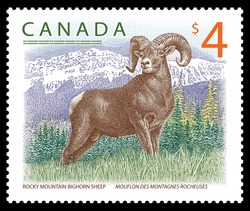 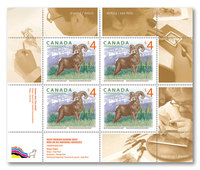 Rise into the rare air of the Canadian Rockies with this stamp featuring the Rocky Mountain bighorn sheep (Ovis canadensis canadensis).

This large and magnificent beast is the perfect complement to our latest high-value definitive, denominated at $4. Produced by a combination of lithography and intaglio, the stamp was designed and engraved by Canadian Bank Note master engraver Jorge Peral, with illustration provided by his son, Rodrigo Peral. The elder Peral’s work has graced several high-value definitives and other stamps, as well as paper currency issued by Canada and other countries.

Rocky Mountain bighorn sheep (Ovis canadensis canadensis) inhabit the mountain ranges from British Columbia and Alberta south to Colorado and New Mexico. With balance-aiding split hooves and rough hoof bottoms for natural grip, they are known for their ability to climb in high, steep rocky terrain. Rams, the male of the subspecies like the one featured on the stamp, have long curled horns, while ewes have shorter, curved ones. They feed on grasses or low-growing vegetation found on slopes where they can spot and escape predators, such as bears, wolves and cougars.

Overhunting, loss of habitat and transfer of diseases from domestic livestock significantly reduced the numbers of Rocky Mountain bighorn sheep in the late 1800s and early 1900s. Thanks to recent conservation efforts, some populations have increased and stabilized, but the bighorn sheep, still vulnerable to disease and habitat loss, is designated as a special concern in British Columbia.

One of the biggest challenges in creating an intaglio stamp is getting the right level of detail. According to Jorge Peral, it’s a fine balance. With too little detail, the intricate beauty of the subject – such as the fine fleece of the sheep or the grass, bent gently in the breeze – is lost. With too much, it can only be appreciated under a magnifying glass.

“Every artist has different goals,” explains Peral. “I love to make something that the public can appreciate with the bare eye.”

The issue includes a pane of four gummed stamps (souvenir sheet), a single stamp Official First Day Cover both designed by David Craib of Parable Communications, an uncut press sheet with nine panes of four stamps signed by master engraver Jorge Peral, a framed and numbered lithographic print, with the stamp, signed by Rodrigo Peral, and a framed enlargement of the stamp image, plus the actual stamp, similar to previous collectibles offered in the engraved high-value definitive line.