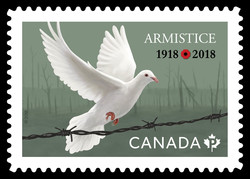 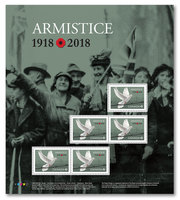 After more than four years of bitter struggle, the fighting in the First World War came to an end at “the eleventh hour of the eleventh day of the eleventh month” of 1918. This stamp celebrates the silencing of the guns and commemorates those who fought and died for peace. Of the more than 650,000 Canadians who served with the Allies, over 66,000 were killed and 172,000 wounded.

Designers Larry Burke and Anna Stredulinsky, of Halifax’s Burke & Burke, placed the dove – a universal symbol of peace – at the centre of the stamp. The bird hovering over barbed wire in a devastated landscape serves as a poignant metaphor for the return of peace to a war-torn world.

“To us, the armistice was less about the moment of its signing than the lasting peace it brought,” explains Burke, adding that photos of the celebrations in 1918 were selected for the booklet, pane and Official First Day Cover to convey the relief, joy and hope that Canadians felt when the fighting stopped.

After the war, Armistice Day was observed on a Monday in early November until 1931, when a campaign led by the Canadian Legion resulted in a fixed date of November 11 and a new name: Remembrance Day. Every year on this day – when the clock strikes eleven – Canadians observe two minutes of silence in honour of the brave individuals who have served Canada in times of war, military conflict and peace. This year, on the 100th anniversary of the First Word War armistice, we once again reflect on their sacrifices and renew our solemn promise never to forget.