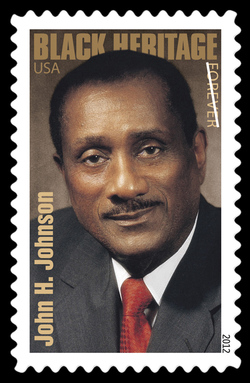 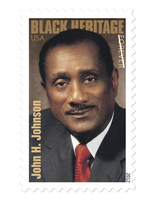 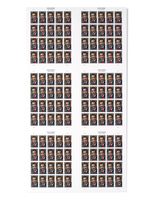 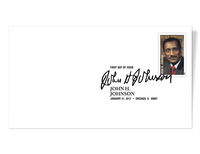 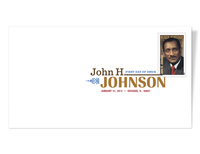 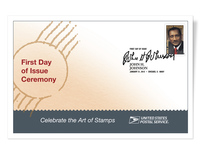 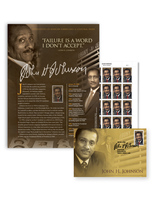 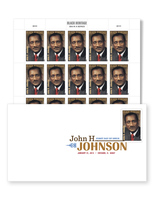 On January 31, 2012, in Chicago, Illinois, the Postal Ser­vice™ will issue a John H. Johnson commemorative stamp (Forever® priced at 45 cents) in one design in a pressure-sensitive adhesive (PSA) pane of 20 stamps. The stamp will go on sale nationwide January 31, 2012.

In 2012, the Postal Service is pleased to honor John H. Johnson, the trailblazing publisher of Ebony, Jet, and other magazines. Johnson overcame poverty and racism to build a business empire embracing magazines, radio stations, cosmetics, and more. His magazines portrayed black people positively at a time when such representation was rare, and played an important role in the civil rights movement.

His unwillingness to accept defeat was a key to Johnson’s success. When he was unable to buy a lot in downtown Chicago because of his skin color, he hired a white lawyer who bought the land in trust. Thus, Johnson became the first black person to build a major building in Chicago’s Loop, where Johnson Publishing still has its headquarters.

As Johnson’s influence, accomplishments, and fortune grew, he received many prizes and honors. He joined Vice President Richard Nixon on a goodwill tour of Africa and served as a Special United States Ambassador for Presidents Kennedy and Johnson. The National Association for the Advancement of Colored People (NAACP) awarded him its prestigious Spingarn Medal in 1966. Six years later, in 1972, his industry peers named him publisher of the year — a prize Johnson compared to winning an Oscar. In presenting Johnson with the Presidential Medal of Freedom in 1996, President Bill Clinton lauded him for giving hope to African Americans during difficult times. A panel of experts polled by Baylor University in 2003 named Johnson “the greatest minority entrepreneur in American history.” That same year, Howard University named its journalism school after him.

The U.S. Postal Service has recognized the achievements of prominent African Americans through the Black Heritage series since 1978. This stamp honoring Johnson is the 35th stamp in that series, which highlights outstanding individuals who helped shape American culture.

The stamp honoring John H. Johnson is being issued as a Forever® stamp. Forever stamps are always equal in value to the current First-Class Mail one-ounce rate.