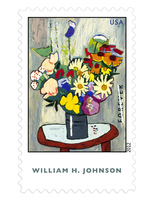 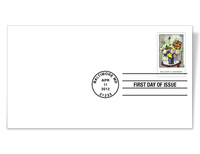 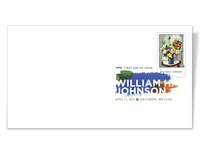 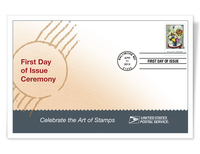 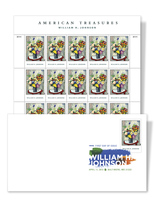 On April 11, 2012, in Baltimore, Maryland, the Postal Service™ will issue a William H. Johnson (Forever® priced at 45 cents) commemorative stamp, in one design in a pressure-sensitive adhesive (PSA) pane of 20 stamps. The stamp will go on sale nationwide April 11, 2012.

One of the country’s foremost African-American artists, William H. Johnson (1901-1970) is today recognized as a major figure in 20th-century American art. Known for his colorful, folk-inspired scenes of African-American daily life as well as his dramatic Scandinavian landscapes, Johnson is recognized on the 11th issuance in the American Treasures series with a still-life painting entitled Flowers.

An oil-on-plywood painting dated 1939-1940, Flowers depicts a vase of boldly rendered, brightly colored blooms on a small red table. The two-dimensional, consciously “naive” style in which Flowers was painted was one of the many techniques of modernist abstraction and “primitive” art adapted by Johnson during his career. The painting, a gift of the Harmon Foundation, belongs to the Smithsonian American Art Museum.

William Henry Johnson was born in Florence, South Carolina. As a child, he practiced drawing by copying comic strips from the newspaper. At the age of 17 he went to live with his uncle in Harlem. He worked at a variety of jobs to save money for tuition at the prestigious National Academy of Design in New York City.

In 1926, Johnson went to France to study modernism. He returned briefly to New York in November 1929 and set up a studio in Harlem. The following year, he received the gold medal for distinguished achievement in fine arts from the William E. Harmon Foundation.

In 1930, Johnson moved to Denmark and married Danish textile artist Holcha Krake. The couple exhibited jointly and traveled throughout Scandinavia, Europe, and North Africa. During this period, Johnson’s work began to reflect his interest in primitivism and folk art.

In November 1938, the couple moved to New York City to escape impending war in Europe. Johnson joined the WPA Federal Art Project as a teacher at the Harlem Community Art Center; he later transferred to the WPA mural project. His first major solo exhibition in New York opened in May 1941.

Following his wife’s death in 1944, Johnson’s physical and mental health declined dramatically. He spent the last 23 years of his life in an institution on Long Island.

Inspired by Johnson’s life story, the William H. Johnson Foundation for the Arts was established in 2001 to provide economic assistance to African-American artists early in their careers.

This stamp is being issued as a Forever® stamp. Forever stamps are always equal in value to the current First-Class Mail one-ounce rate.