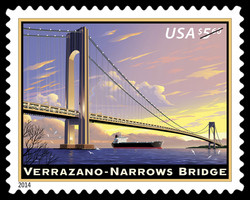 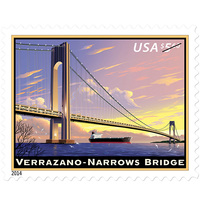 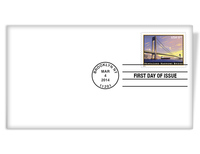 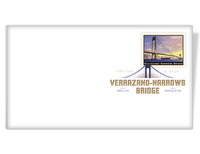 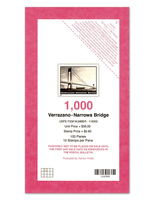 On March 4, 2014, in Brooklyn, New York, the U.S. Postal Service® will issue the Verrazano-Narrows Bridge $5.60 Priority Mail® stamp in one design, in a pressure-sensitive adhesive (PSA) pane of 10 stamps. The stamp will go on sale nationwide March 4, 2014.

Majestic, graceful, powerful - the Verrazano-Narrows Bridge is a breathtaking sight visible from vantage points in all five of New York City's boroughs. The bridge celebrates its 50th anniversary in 2014, which the U.S. Postal Service® commemorates with this new Priority Mail™ stamp.

The digital illustration on the stamp captures the grandeur of the Verrazano, not only showing its sheer size and scale, but also giving a sense of the sweeping curve of the double-decker roadway. The artist chose to showcase the bridge at twilight, which offers an interesting play of light and shadow.

The bridge's center span is 4,260 feet long - so long that its two monumental towers, soaring 690 feet into the sky, are spaced one-and-five-eighths inches farther apart at their tops than at their bases to compensate for the curvature of the earth.

At time of the opening of the upper deck on November 21, 1964, it was the longest suspension bridge in the world. (The lower deck opened five years later.)