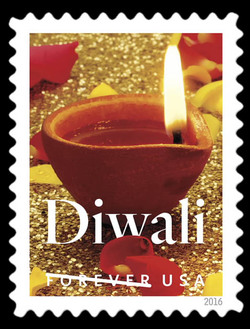 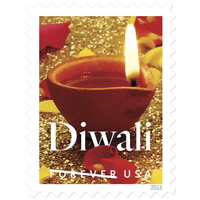 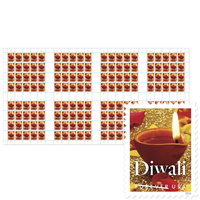 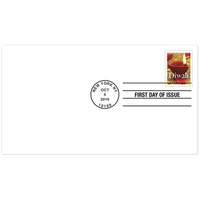 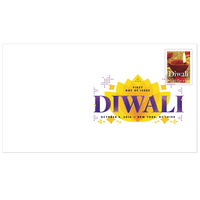 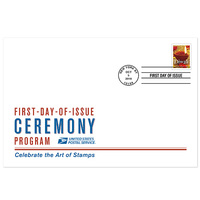 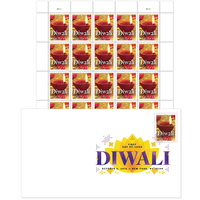 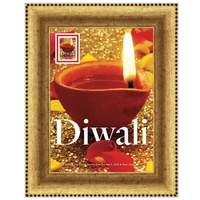 On October 5, 2016 in New York, NY, the U.S. Postal Service® will issue the Diwali stamp (Forever® priced at 47 cents) in one design, in a pressure-sensitive adhesive (PSA) pane of 20 stamps. The stamp will go on sale nationwide October 5, 2016.

In 2016, the U.S. Postal Service® commemorates the joyous festival of Diwali, which is also known as Deepavali. One of the most important annual Hindu events, the holiday celebrates the triumph of good over evil. Spanning five days each autumn, it is considered by some to be the start of the new year.

Diwali is a shortened version of the Sanskrit word Deepavali, which roughly translates as a necklace of lights. During Diwali flickering oil-wick lamps called diyas dot the homes of observers around the world. The stamp features a traditional diya against a background of glimmering gold and flower petals.

The meaning of Diwali often depends on regional identity on the Indian subcontinent, but Hindu stories provide a framework for the significance of the festival. For many people in the north of India, the holiday honors the return of Rama, an incarnation or avatar of the god Vishnu, after a long period of exile. For some in the south of India, it marks the defeat of the demon Narakasura by Krishna, another incarnation of Vishnu. Others commemorate Vishnu's decision to make King Bali ruler of the underworld.

Before the festival, many Hindus go shopping; clean their homes; open their doors and windows; create intricate rangoli, a vibrant floor pattern traditionally made from materials such as rice powder, colored sand, and flower petals; and light diyas with hopes that Lakshmi, the goddess of wealth and prosperity, will visit. In some regions of India, people gamble and play games, just as Hindu lore says that deity Shiva did. On the festive main day of the holiday, families pray to Lakshmi, dress up in their best clothes, enjoy lavish feasts and sweets, exchange gifts, and light fireworks. Diwali also marks the new year for people in Gujarat and a few other states in India.

Diwali is an important festival in several religions. Buddhists honor ancient Indian Emperor Ashoka's conversion to Buddhism. Jains commemorate the teacher Mahavira's attainment of liberation from the cycle of life and death. Sikhs celebrate the freeing of guru Hargobind from captivity.

On the Hindu calendar, Diwali falls on the eve of or on the new moon that occurs between mid-October and mid-November. In 2016, the main day of the festival will be celebrated on October 29 (for South Indians) and October 30 (for North Indians).

The Diwali stamp is being issued as a Forever® stamp. This Forever stamp will always be equal in value to the current First-Class Mail® one-ounce price.