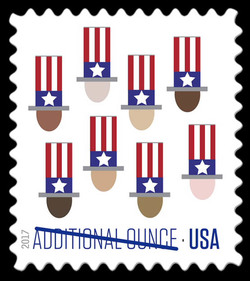 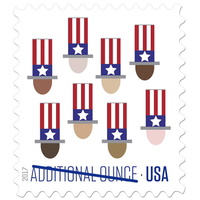 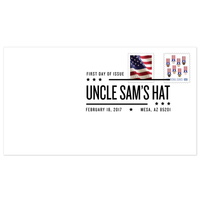 On February 18, 2017, in Mesa, AZ, the U.S. Postal Service® will issue the Uncle Sam’s Hat additional ounce rate stamp (Nondenominated priced at 21 cents), in one design, in a pressure-sensitive adhesive (PSA) pane of 20 stamps. The stamp will go on sale nationwide February 18, 2017.

With the release of Uncle Sam's Hat in 2017, the U.S. Postal Service celebrates one of our country's most popular patriotic characters. Uncle Sam has represented the bravery and fortitude of the American spirit for more than 150 years.

The stamp features eight graphic top hats in Uncle Sam's signature style, with red and white vertical stripes above a blue band with a white star and a gray brim. Beneath each hat is an oval shape representing a face, each in a different shade, meant to suggest the ethnic and racial diversity of the United States.

The creation of Uncle Sam as a popular icon in American culture is associated with a businessman named Sam Wilson of Troy, New York. Wilson, who was often called Uncle Sam by his devoted workers, operated a successful slaughterhouse and meatpacking business for decades. When war broke out in 1812, he signed a contract to become a supplier of canned beef and pork for the American troops stationed in New York. Stamped with U.S. by the Army to denote their provenance, his cans became known as Uncle Sam's meat by the soldiers. Uncle Sam soon turned into a nickname for the United States. By the 1830s, the character began appearing in cartoons and advertisements.

Many artists have depicted their own versions of this important figure throughout the years. Uncle Sam's dress and appearance have evolved since his first iteration, but certain distinguishing elements help make him instantly recognizable and timeless: a dress coat with long tails, red-and-white striped pants, white whiskers, a stoic expression, and a top hat. Looking like a wise, flinty old uncle not to be crossed in his patriotic uniform, Uncle Sam represents our nation's values of liberty and strength.

The words ADDITIONAL OUNCE on this stamp indicate its usage value. Like a Forever stamp, this stamp will always be valid for the rate printed on it.